El Nido is a small town situated on the north-eastern tip of the island Palawan. You have two modes of transportation to this town, driving or flying. We tried to remain frugal through this trip, spending as little money as possible when it came to things like accommodations and getting around which left us with more money on things we enjoy (foooooood). Now flying to Palawan was possible from Manilla and if you have the money there is one airline ITI Air that will take you there. The prices are a bit steep but we ended taking it back to Manilla to make our connecting flight to South Korea. If time is not on your side I recommend that route. Sara and I opted for the bus ride through the jungle. Which was long (7 hours) and quite bumpy as you near El Nido. The bus is the way to go, we spoke to other backpackers in El Nido who took the van and regretted it. Because the drivers want to earn as much money as possible to make this long drive (understandable) the people we spoke to were crammed in there like sardines. On the bus we had three seats to ourselves and it was air conditioned (not important since it was not to hot) and it was quite comfortable overall. Plus you get some amazing views and will hopefully speak to some locals on the bus.

Sara and I made a mistake as soon as we arrived to El Nido. The bus stops at a terminal which is roughly 10-15min walk from the center of town. There is mostly trikes in El Nido so that is your primary mode of transporation if you are visiting. You do not need to take a trike to the center of town, just walk. The trikes all charge the same fare and are more expensive than the ones found in Puerto Princesa. We hopped on a trike and made the 45 second ride to our accommodations at El Nido Viewdeck Cottages.

The view from our balcony.

El Nido Viewdeck Cottages was a fantastic place to stay. When we booked (last minute) all that was available was an air conditioned room versus rooms with just fans. The breeze coming off the ocean is sufficient enough to keep you cool in the evening. I read some complaints on other travel websites and blogs which stated that they were disappointed with their room because of bugs, lizards, frogs, the noise from animals, the noise from town, and the walk about the side of the hill. We were at the top of the property which had an awesome view. Yes there are bugs but your room is in the jungle, yes there are lizards everywhere, and yes animals live in the jungle. I guess the only downside is that you have to walk into town for a few minutes to get things (walking is good for you:)). If you want to avoid all these things then I suggest going to a fancy resort in a few years when El Nido becomes the next Boracay. In the meantime if you want quiet and a view then go to El Nido Viewdeck Cottages. 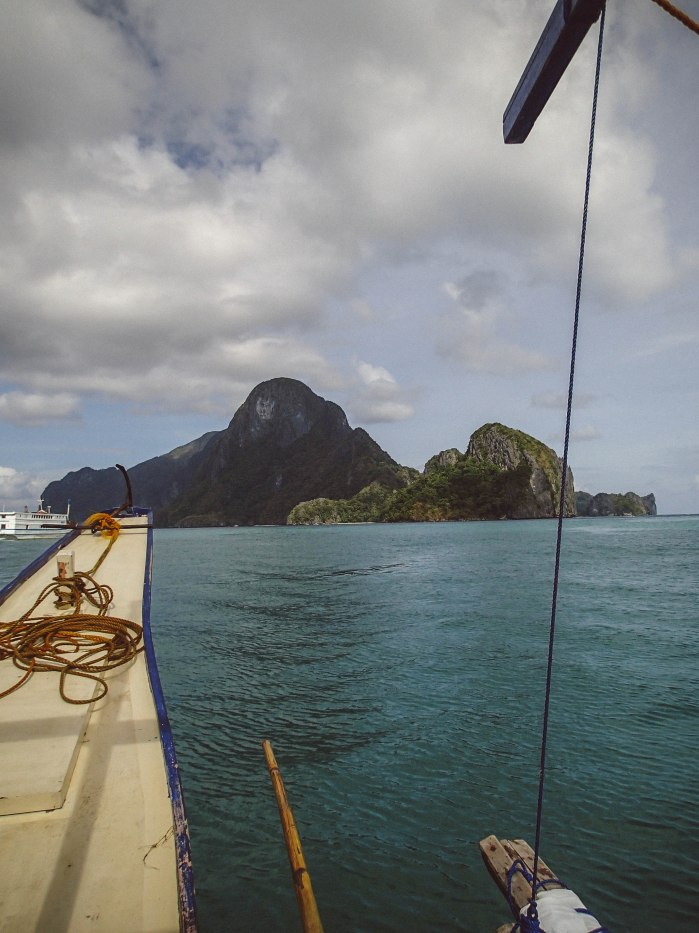 We did a lot in El Nido, the weather was finally better and we had some money left over from the botched Underground River tour in Puerto Princesa (thanks nature). We decided to take Tour C (??) and left super late around 10. Now I am not a tour kind of person, getting lost and finding your own way is much more exciting to me. I can only recommend the tours if you manage to meet a decent group of people or get on the smallest boat. The prices are are the same for each company and I think lunch is pretty much standard with them. The smaller the boat means less people and more choice. We ended up having the same problem that we had in Puerto Princesa, people that didn’t want to get in the water. Again, I have no idea what the point of going on the tour is if you are scared of the water but regardless it happened again. As soon as the boat stopped I dove into the water and snorkeled on the reef, diving as deeps as I could and letting the current take me around. The tour takes you to some pretty unique places. The cliffs are jagged and tower above the crystal blue water. It really is perfect. 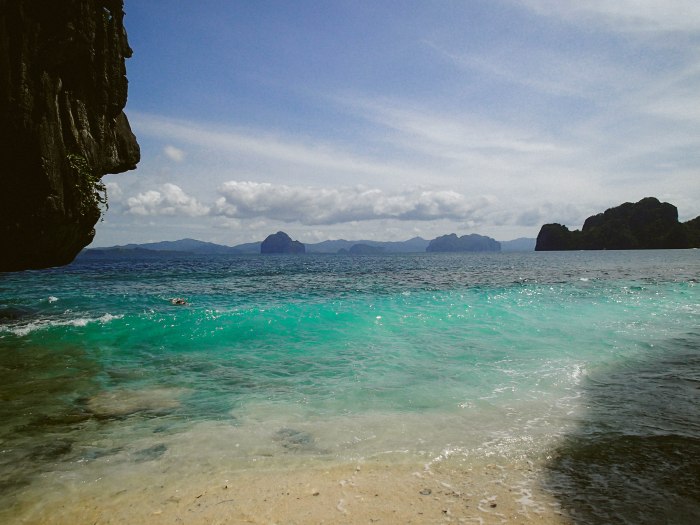 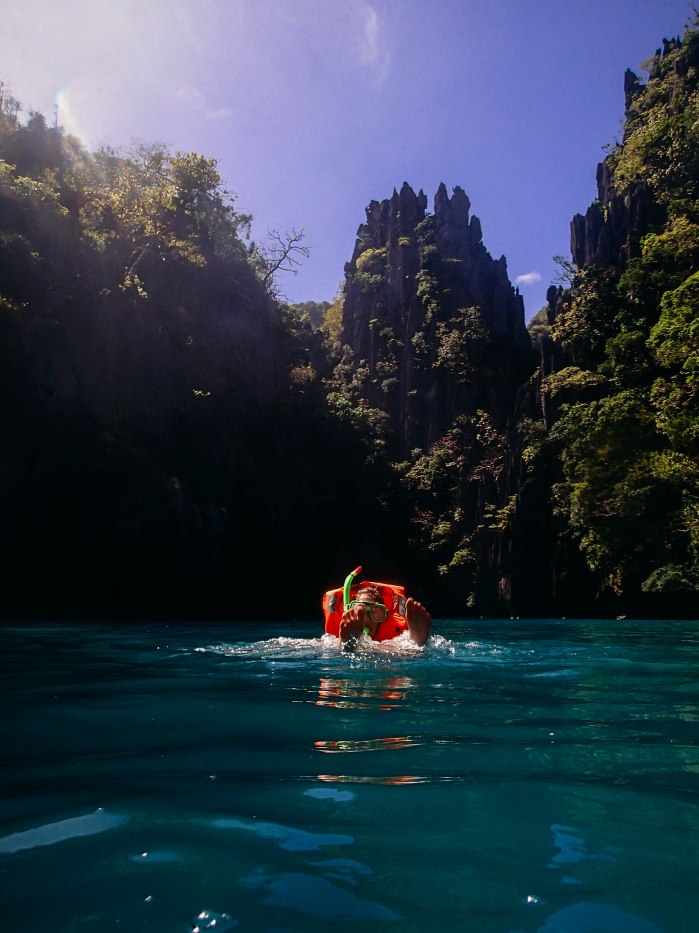 There are alternatives to the guided tours, for one you could rent a boat privately if you have the cash or you can rent a kayak for the day which was less than 20$ for two people. The kayaks were the way to go! We rented them twice and the first time we paddled roughly 15km our first day and slightly less the second day. We paddled all the way to helicopter island on some rough water, the second day the water was quite calm making it much easier to navigate. The kayaks are a fantastic way to go out and enjoy the islands, and manage to find places where you are totally isolated. Having control over where you want to go trumps the guided tour for me, as I spent hours snorkeling above the reefs completely alone without dozens of people coming and going every 25 minutes while they destroy the coral on their walk to the beach. 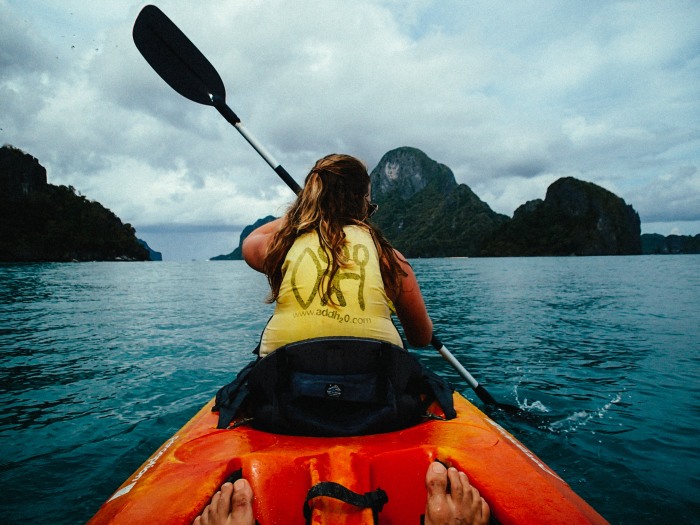 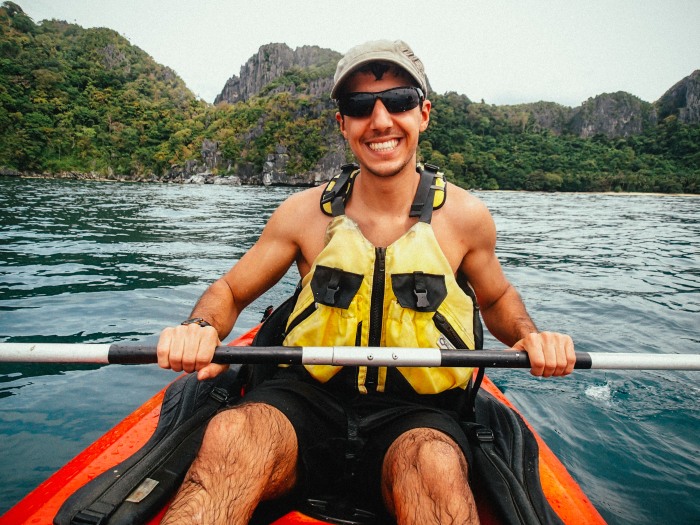 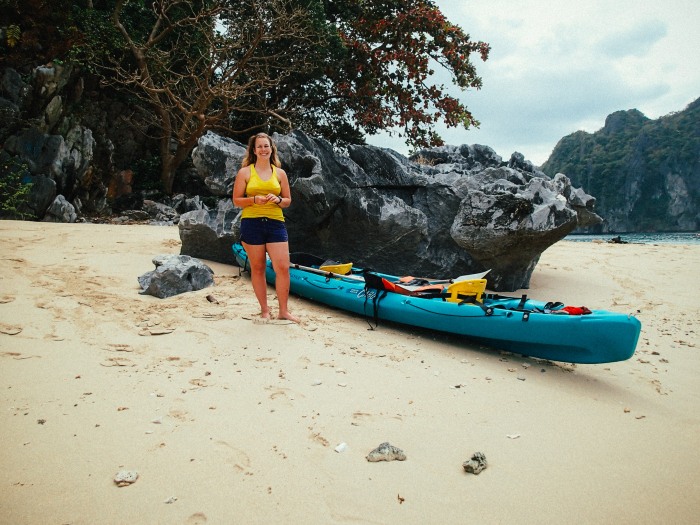 You get a dry bag included with the kayak which gives you a place to keep your valuables and lunch dry if you plan to stay out for the whole day. The freedom that the kayaks give your outweigh the boat tour to me ten to one. If anything I recommend doing one tour and then picking your favourite island and paddling out to it and spending as much time as you please in that location.

This Damsel is not happy that I am near its Acropora home. 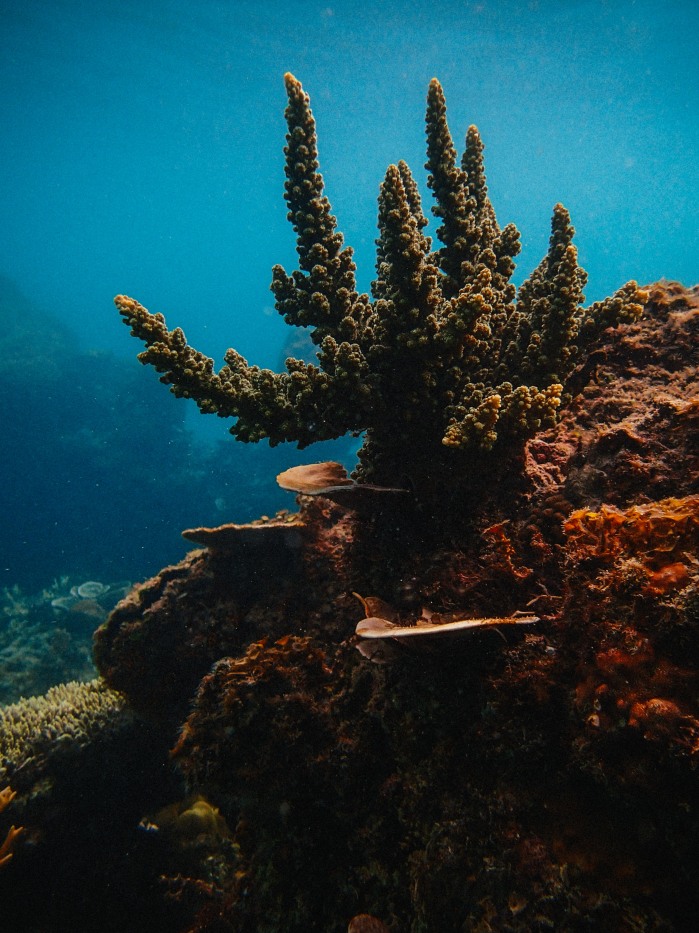 We spent a lot of time relaxing with the dogs.

Mangroves are thick and lush around the shore. 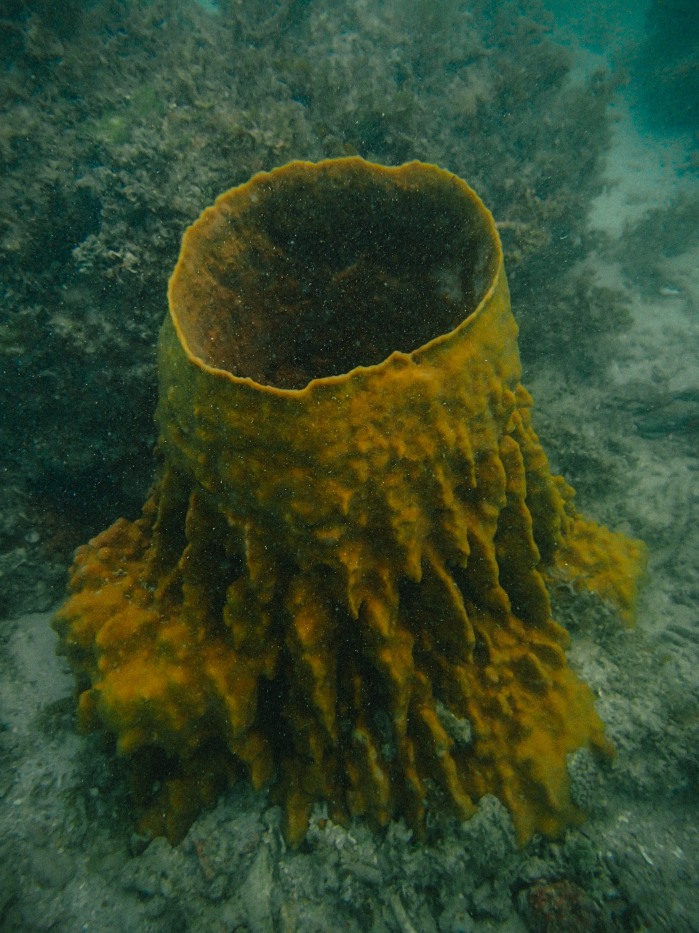 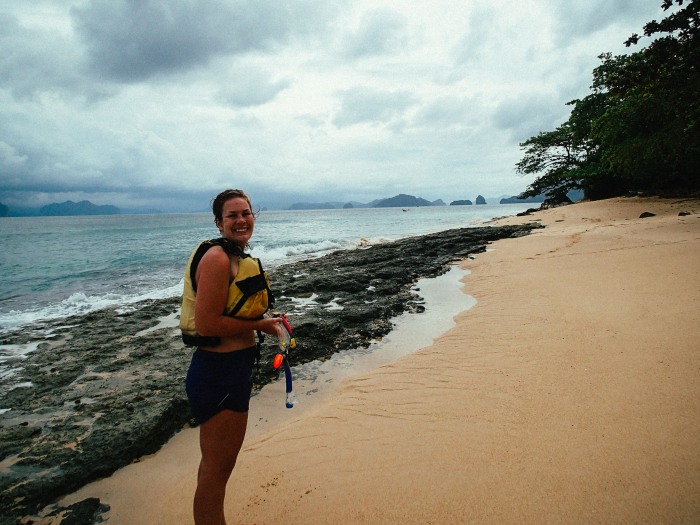 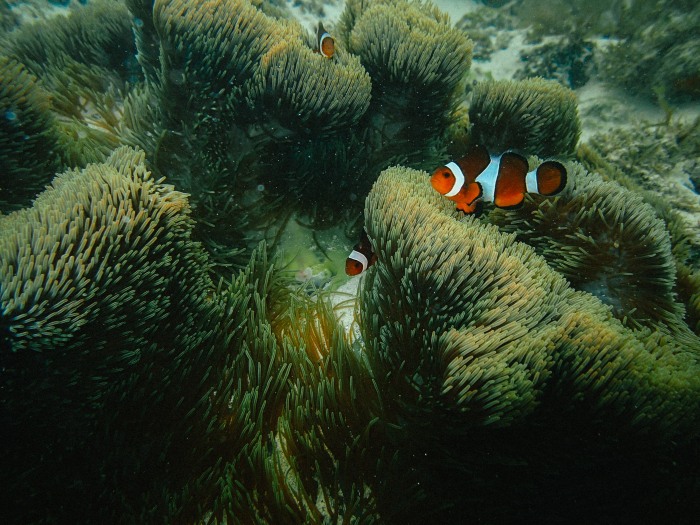 I tried keep up to the turtle… 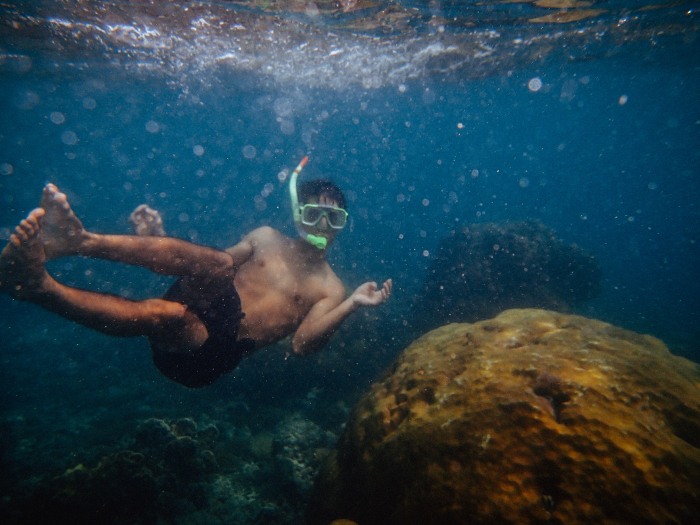 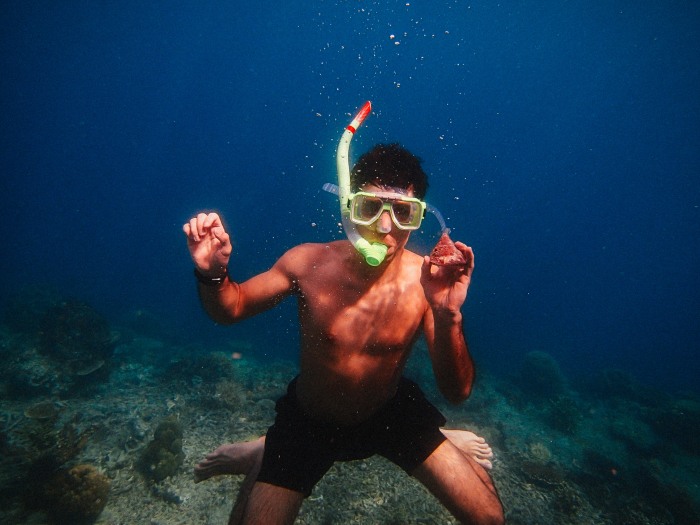 El Nido is full of great restaurants with prices that are quite reasonable considering El Nido is an isolated community far away from Puerto Princesa. We checked out the regular restaurants but the one place that stood out was an awesome pizza place call Atrove. Now this place was packed and we were so hungry after paddling and snorkeling all day that there was no chance of waiting in the massive line. So I went up into the restaurants and ordered take out. I wish we had more time in El Nido so we could go back and eat in the restaurant, it is a pretty unique building. We got our pizza and headed back to our balcony overlooking the town and cliffs and called it a night.

There are many decent places to eat but we had a bad experience at Sea Slugs after eating there our second time. It right on the water and as the tide comes in you can sit on the beach and get your feet wet (or soaked depending on the waves). We went there for lunch one day and none of Sara’s chicken was cooked. A simple mistake I guess but we just shared my meal instead and sent it back. Getting it taken off the bill was a bit of a hassle. Also we were ordering a lot of beer our last evening in El Nido there and they added a few extra onto the bill, we obviously noticed and they had no problem taking it off on the spot. Do they add drinks on to other tourists…

We went off path 🙂 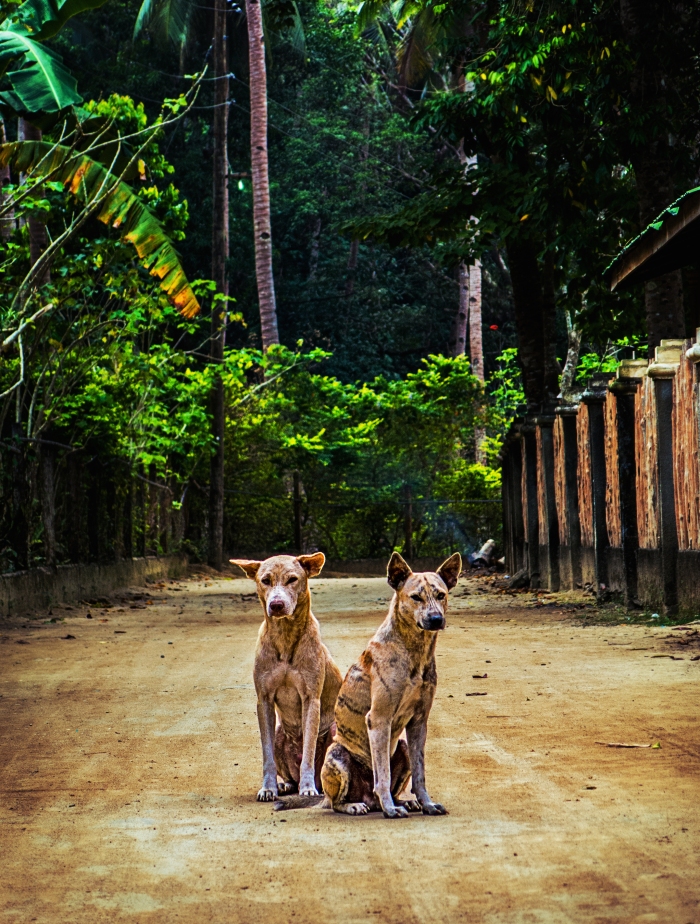 I asked these dogs to sit properly so I could take a photo. 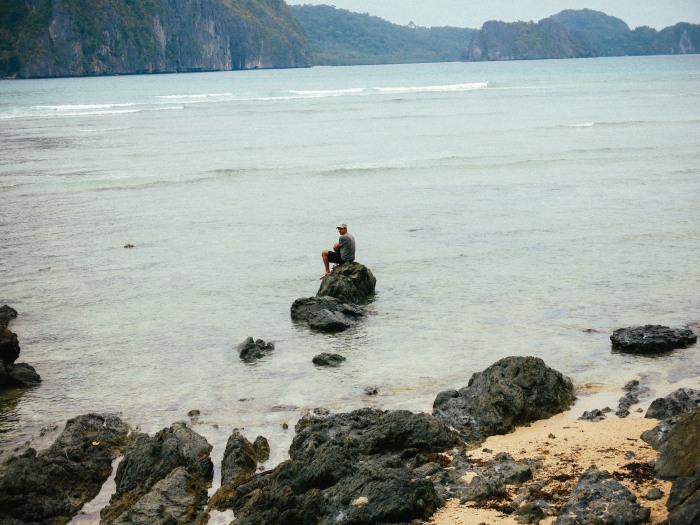 Sara found me playing with the crabs, snails, and gobies as the tide came in. 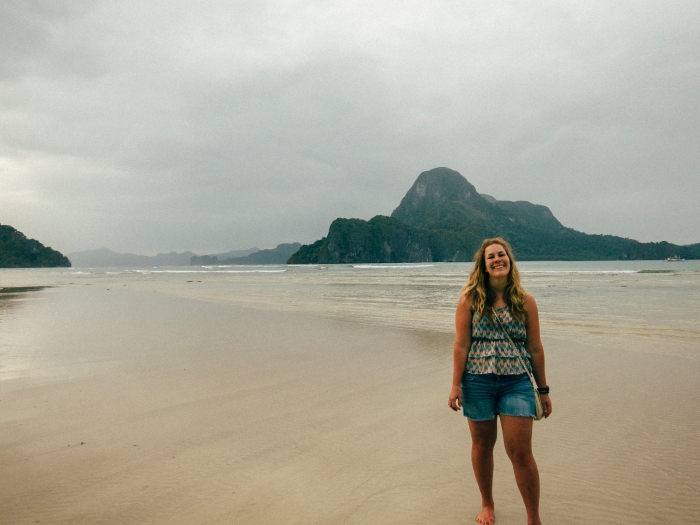 Take a walk along the coast in El Nido. Private beach for us.

Sorry, he was here first.

El Nido as the sun sets.

If anyone is thinking about travelling to the Philippines then I would highly recommend making Palawan part of your trip. We had a great time there regardless of the dodgy weather early on. If anything you will remember how friendly and polite the people are. I hope that in the future I can eventually travel back there before it becomes the ultra touristy Boracay and it remains a places were the laid back island lifestyle remains intact.

2 thoughts on “El Nido – The Gem of the Philippines”